Trace: • Dingy airshaft is Brooklyn artist's easel & easier on the eye for tenants - as a gift from landlord!
dingy_airshaft_is_brooklyn_artist_s_easel_easier_on_the_eye_for_tenants_-_as_a_gift_from_landlord

Dingy airshaft is Brooklyn artist's easel & easier on the eye for tenants - as a gift from landlord! 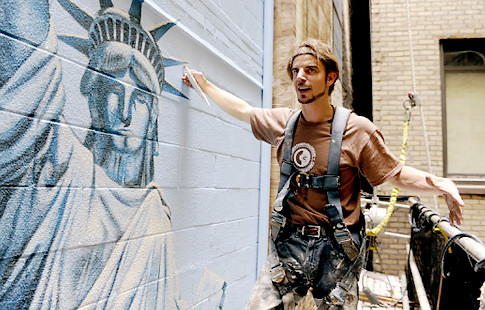 Artist Patrick Ganino labors on his painting of a three-story tall Statue of Liberty, part of a 12-story high mural going up in the courtyard of two neighboring downtown Brooklyn towers.

It's the biggest work of art in Brooklyn you won't get to see.

An artist is painting a brightly colored 12-story high mural - concealed from the public eye - in the courtyard of two neighboring downtown Brooklyn towers.

“This is just for the tenants, because they were looking out of their windows onto a crummy courtyard,” said Patrick Ganino, 33, the artist who has adorned the five-sided atrium with classic New York images, including a three-story tall Statue of Liberty.

The owner of the adjoining buildings at 186 Joralemon St. hatched the project for two reasons - kindness to his tenants and economic reality.

“That space was not the best view, so I thought how can I make it more pleasant for the tenants,” said landlord Barry Jacobson. “I wanted to give them something to look at that would be interesting, informative and creative.”

Plus, it could be easier to rent office space if the building is more attractive. “It was an artistic approach to how you market real estate in good or bad times,” said Jacobson.

When Ganino puts the final touches on his work in three weeks, it will feature 40 iconic Big Apple sites, including the Cyclone roller coaster, the Brooklyn and Verrazano bridges and Central Park.

He uses a mechanized platform to scale and descend the courtyard's walls and it will take 30 gallons of weatherproof paint to cover them.

Ganino, who is working with a friend on the mural, said the project is “way ahead of schedule” despite frequent rain when he started in August that sidelined the team for days.

“We got 10 total days of rain, which was a nightmare for us,” he said. “It was a little stressful.”

His past clients have included Judge Judy Sheindlin, the black-robed star of a TV court show. Ganino did decorative painting in her Greenwich, Conn., mansion.

“It's right outside my window, and it's an improvement over the dingy airshaft,” said Alison Gilles, 28, who works for the New Teacher Project, an education organization. “It's been fun watching the guys paint,” she added.

Everyone else can monitor Ganino's progress on his Web site - patrickganino.blogspot.com - where he posts updates on the mural.